Why Lean? Because it works around the world!

All of the students in HRD 304 this semester have jobs in addition to attending Oakland University. And most have been working for some time. However, hardly any of them have worked for a company that practices lean. The students registered for this course for a variety of reasons, but they don’t know much about lean or why lean is important. In my first lecture I try to impress upon them that lean is critical to our country’s future because we are in a fiercely competitive global fight to preserve and improve our standard of living.

To set the stage, the first facts I throw at them reflect the wide disparity between U.S. wage rates and the wage rates of competing nations, primarily China. For example: 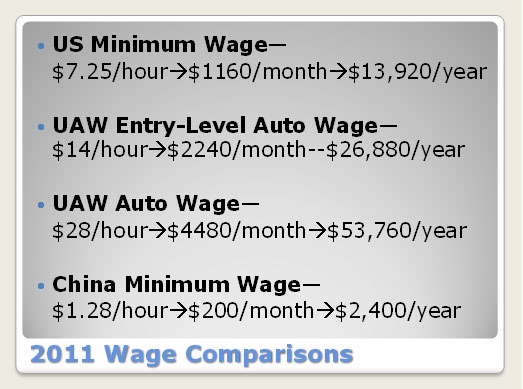 I want the students to see the dramatic differences in wage rates so they can fully appreciate what U.S. companies, especially manufacturers, are up against in the global marketplace. We define and discuss the concepts of employee wage rates, benefits, labor productivity and unit labor costs. Most students don’t know how these concepts interrelate to affect our global competitiveness and drive the growth of our material standard of living. I stress that the solution to global competitiveness is not simply outsourcing to low-wage countries like China. U.S. companies need to adopt lean policies and practices to reduce waste in their value streams. By doing so, lean has the potential to reduce costs and increase output so that increases in employee wage rates don’t necessarily increase unit labor costs and reduce global competitiveness.

I then show them a slide (see below) that I prepared last year for a Michigan tool & die lean workshop which further amplifies the competitive forces that U.S. companies are facing in the global marketplace. 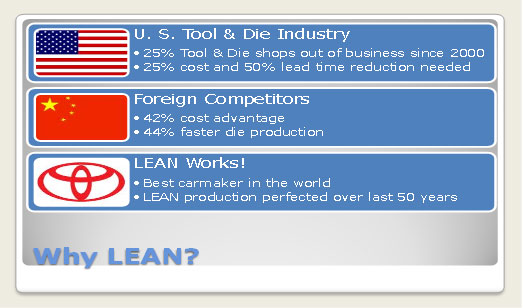 I use this slide to segue into the history of Toyota where I highlight its expansion into the U.S. and ultimate rise to the global leader in auto sales in 2007. I describe for them Toyota’s first foray into the U.S.–its NUMMI joint venture with GM in 1984. In that case, Toyota reopened the closed GM assembly plant in Fremont, California and hired back most of the UAW-represented employees that had been described by some as the “worst workforce in the U.S. automobile industry.” Despite this inauspicious beginning, Toyota successfully introduced its lean production system at NUMMI and almost from the start produced the highest quality cars in the GM system and continued to do so until 2009 when GM pulled out of the joint venture. Despite these successes, lean manufacturing was very slow to catch on at GM as the next slide suggests. 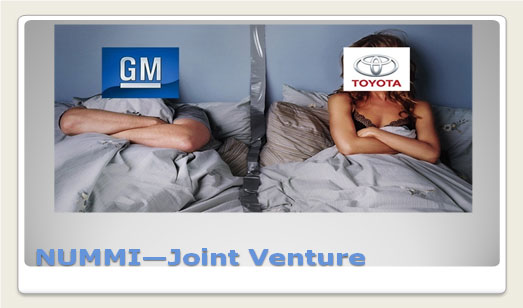 We then discuss Toyota’s first U.S. assembly plant (TMMK) which opened in Georgetown, Kentucky in 1988 and immediately began producing quality vehicles using the lean production system. Toyota’s American workers there successfully adapted to the Toyota or lean system. TMMK employees have embraced the lean principle of kaizen. They strive for constant improvement. They take responsibility for the quality of their parts and products. They feel free to pull the and on cord to stop production when they spot a problem on a vehicle. They consider it part of their job to identify problems and then fix them. They generate over 90,000 suggestions which are implemented each year. Over 60% of TMMK employees achieve perfect attendance annually. And Toyota shows the utmost respect for its employees by protecting their employment security. Despite nearly a 30% drop in U.S. sales in the 2008-9 recession, no TMMK employees were laid off from their jobs.

Toyota has definitely proven that the lean system can work in the U.S. and around the world, even in the very tough union environment at NUMMI. It can work for your business too. Over the course of this semester, I will be showing the students how Toyota and a growing number of American firms are confounding conventional wisdom about the state of U.S. manufacturing. These companies are not having trouble manufacturing high quality products profitably while offering their employees excellent wages and benefits.